The Chaga mushroom (Inonotus obliquus) grows predominantly in cold Taiga forests, along the northern latitudes of Russia, Scandinavia and Canada.
In western Siberia, Chaga has been medically used at least since the 13th century, primarily to fight infections. It has now become a known superfood.

The Chaga mushroom (Inonotus obliquus) grows predominantly in cold Taiga forests, along the northern latitudes of Russia, Scandinavia and Canada.
In western Siberia, Chaga has been medically used at least since the 13th century, primarily to fight infections. It has now become a known superfood.

This mushroom sustains itself through a complicated symbiotic relationship with the birch tree. When it loses branches or suffers damage from storms, the Chaga mushroom grows over the tree's wound to serve as a protective scar. The birch tree can continue living for many years while mounds of Chaga fungus adorn its trunk.

2 Reviews
€20.00
Pink Paradise symbolizes love and unity. Return to the absolute essence and celebrate life the way nature intended. A warm blanket of love will welcome you, after which an intense sense of harmony will take you by the hand. Meanwhile, dance along to the funky vibes of your mind and feel freer than ever. Walls disappear, connections arise and everything...
Magic Mushrooms

€14.95
A natural way to relax and realise Research indicates that periodic microdosing helps to prevent stress and tension. Various other positive effects ensue in turn, such as improved sleep, more energy, more creativity and users are more open in their social interactions with other people. Microdosing thus helps prevent complaints such as exhaustion,...
Magic Mushrooms

€44.00
The Psilocybe Cubensis Mckennaii spores are named after the famous Terence Mckenna. This Growkit is available in 1200ml & 2100ml [XL]
Magic Mushrooms

2 Reviews
€21.99
Mycotrop is the strongest truffle variety available through our store. With an overall strength rating of 6 out of 5, these truffles provide intense trips characterized by strong visuals and deep, profound thinking. Available through only a few online dispensaries, this is one of our most sought-after and fast-selling items.

11 other products in the same category: 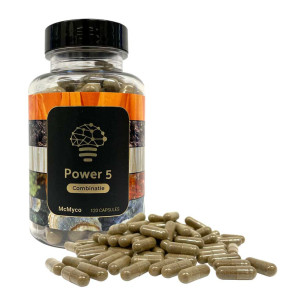 €33.00
The Reishi is a mushroom that has been valued for its beneficial effects for 2000 years. The mushroom of immortality, as the Reishi is also called, contains high levels of polysaccharides, beta-glucans and triterpenes. These substances can have a very positive effect on the body and increase vitality.
Mushroom Tincture & Extract

€35.00
The Reishi mushroom (Ganoderma lucidum), also nicknamed the “King of mushrooms”, has a long-standing role in Chinese and Japanese medicinal history. It is called “Lingzhi” in Chinese, which translates to “Mushroom of immortality”.
Mushroom Tincture & Extract

€33.00
The Turkey Tail mushrooms have been widely researched because of their medicinal properties. They are very nutritious and a source of antioxidants.
Home

€33.00
Number of capsules: 120 caps Size of capsules: Size 0 Net content Capsules: 400mg Dosage: Take 1-2 capsules twice a day with water during the meal.
Tap to zoom
You need to login or create account