Until recently, it seemed impossible to grow skunks and other potent hybrids to full maturity in regions with short summers. Since the fat buds tend towards mould in poor weather, growers were forced to harvest their plants before flowering had reached its peak. Sensi Seeds set out to resolve this problem once and for all.

The answer is Early Skunk Feminized (35% sativa, 65% indica). These cannabis seeds combine the vitality and size of Skunk #1 with the hardiness of Early Pearl in a feminine hybrid with a turbo-charged result. On your balcony, in the garden or in any other sunny spot, Early Skunk will thrive anywhere!

Its great reliability immediately catapulted Early Skunk into first place in our outdoor collection. This feminized strain, which produces female plants only, saves growers from having to weed out male shoots at the start of the flowering period.

During the flowering stage, Early Skunk Feminized achieves above-average growth. The plants can easily reach in excess of two metres. To exploit their full potential, you should leave them for 55 to 65 days. Your plants will thank you with resin-encrusted bud formation and rich yields that reveal their indica genetics.

Advanced cultivation techniques such as Sea of Green (SOG), Screen of Green (SCROG), Supercropping and Lollipopping are generally used for indoor cultivation, but they can also generate bigger yields outside in the fresh air.

While the indica genes dominate in the growth pattern, the sativa components are immediately noticeable in the final effect. A mild, bright high combines with the warm, relaxing stone of skunk, taking smokers to new dimensions. Keep a few snacks close to hand, as this weed is known to trigger the munchies.

During the flowering period, this cannabis strain has a rather intensive scent, but on consumption you’ll notice more of a mild sweetness. Don’t expect an explosion of flavour. Its mild aroma is precisely what many smokers love. 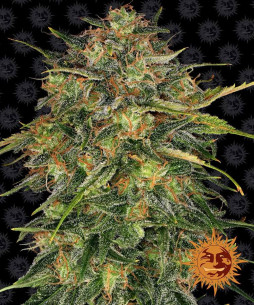